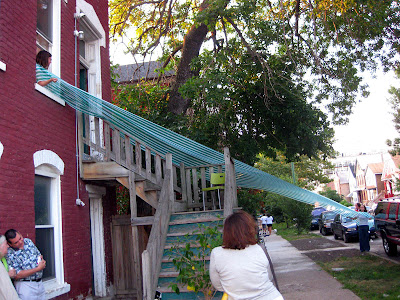 Things That Have Once Been in Contact, 2009
performance documentation

Using a 45’ expanse of fabric that extends between CamLab's bodies, this live performance made the gallery’s presence in its surrounding neighborhood visible. While inhabiting the ephemeral architecture, CamLab’s “duologue” functioned as a meta-narrative that theorized the performance as it unfolded. Consisting of texts both found and composed, topics included architectural theory, feminism in popular culture, and walking under umbrellas in the rain. The hermetic back-and-forth across the length of flapping (in the wind) fabric continually took its cues from the physical realities of the situation.
Newer Post Older Post Home